W. LEE Ultraplast, the leader in plastics welding technology in South Africa, has just celebrated its 39th year in business in 2014. It has been the Branson agent throughout this time.

The company was founded by Bill Lee in 1975, and initially Bill fitted out a caravan – the ‘Branson Demonstration Unit’ – and took it to shows and visits to customers. In the process he introduced ultrasonic welding to many.

Bill had actually got involved in ultrasonics earlier. He had joined Newton & Taylor, a Johannesburg converting company; which purchased a Branson ultrasonic welder in 1965. He was sent to visit Branson in Connecticut in the USA and became fascinated by the technology. Now, four decades later, Bill still gets excited when faced with challenging applications for ultrasonics.

Lee Ultraplast has evolved somewhat since and now occupies extensive premises at Devland in Johannesburg. Here Bill and his team conduct testing and trials and their objective is to find a solution for every plastics joining problem. They build jigs to position mouldings and other items to be joined. Any plastic product – from fuel tanks to textile fabrics – can be joined!Initially the solutions weren’t that obvious: “We had to make everything work, and, since a lot of the technology was new, it wasn’t that easy, but that’s what made it interesting for me,” said Bill. Ultraplast’s relationship with Branson has been on-going. 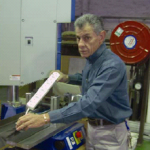 Joining things – Bill Lee of W Lee Ultraplast with a Branson welding system for joining multi-adaptor plugs. This unit is unusual as it operates on a continuous scanning basis: parts are fed at random or regular intervals onto the conveyor, the parts trigger a photoelectric circuit which activates the ultrasonic welders and are welded continuously as they pass beneath the horn.

Over the past 50 years, this USA systems supplier has developed its operation to the point where it has become the major world supplier of ultrasonic systems and techniques. Branson ultrasonic equipment converts 50/60Hz current to 15, 20, 30 or 40kHz electrical a converter that transforms it to mechanical motion at ultrasonic frequencies.

The mechanical motion is then transmitted through an amplitude-modifying booster to a ‘horn’. The horn, an acoustic tool, transfers this vibratory energy directly to the parts being assembled. The vibrations are transmitted to the joint area where heat is created through friction that melts the plastic. After the melt is completed, ultrasonic energy is terminated and pressure is applied while the material solidifies.

Ultraplast manufactures the horns, jigging and specialised systems that use the ultrasonic energy for the many assembly applications. This ultrasonically generated frictional heat can be used for repetitive welding or continuous welding. Ultrasonic frequencies used in SA are normally between 40 000Hz (800 x mains frequency) and 20 000Hz, all of which lie outside the audio-frequency range and are as a result inaudible. The actual welding process typically takes 0,1-0,5 seconds followed by 0,5-1sec to cool.

Carousels or similar devices can be used to make the process semi-automatic, which is ideal for the unskilled operator. Often joins need to be made in sections of mouldings that are difficult to access, or where one or more of the components being joined can only be positioned in certain ways, creating difficult challenges for the ultrasonic system, but this is the norm for Bill, whose business is finding the solution for every ultrasonic joining requirement.

Many thanks for your great service on our Branson welder. Not many companies offer such a good after sales service these days. We are truly grateful to W - Lee Ultraplast for this.